After Kolkata, Delhi and Bengaluru, the Chandigarh is the next city that will have metro services. Chandigarh Metro is in planning stage right now and is meant to serve the residents of Chandigarh with quickest mode of communication to travel from one part of the city to the other. A detailed project report about the Chandigarh Metro Project is submitted by Delhi Metro Rail Corporation to the Punjab Governor and Union Territory administrator somewhere in the middle of 2012 so that the project could be started very soon.

The last decade, there has been yearly 6% increase in the population in Chandigarh Urban Complex. As numbers of people are increasing and they are becoming affluent, numbers of vehicles have been increasing noticeably. Chandigarh City has the highest per capita income out of all cities of India. Not only Chandigarh but the surrounding towns are also witnessing heavy increase in population thereby lots of pressure get created on the public transport system of Chandigarh and around. 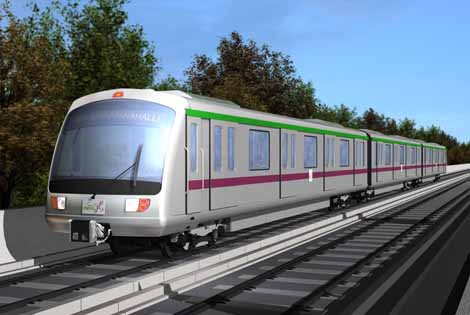 With more numbers of vehicles on the road, environment pollution is high in Chandigarh City. Road space is enough in Chandigarh City but what is important is to use the space judiciously. Many important city junctions of Chandigarh e.g. Madhya Marg, Himalaya Marg, Udyogpath, Jan Marg etc have high traffic volumes and traffic situations of these places cannot be controlled well. Due to heavy traffic in the city, parking is also a problem. All these problems have led to the proposal of Metro Railway Project in Chandigarh.

The Proposed Plan for Chandigarh Metro:

Total of 16 metro trains are planned for Chandigarh Metro. 10 runs would run on East West Corridor and rest 6 would run on North South Corridor. Each of these trains would have 4 coaches. The first train would start at 5:30 AM and the last train would start at 10:30 PM. There are 30 metro stations planned for Chandigarh Metro Project. Bigger Metro Stations are proposed for sector 17, 22, 35, 43, Housing Board and Phase 7. 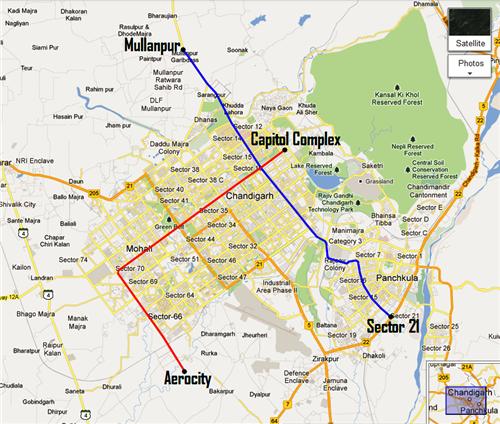 The main Metro Station is proposed at Sector 17 as this sector will be the intersection point for two corridors of Chandigarh Metro- North-South and East-West Corridors.

During the first phase of Chandigarh Metro, the North South Corridor is planned to run from the Capital Complex (the head of the city as per the plan laid by the creator of the city, respectable designer and architect, LE Corbusier) in sector 17 up to Mohali. The total distance covered will be 12.47 km.  The proposed East West Corridor will have metro trains running from Mullanpur, located in New Chandigarh to Panchkula, Sector 21 and the total distance covered would be 25.08 km.

The various routes proposed within the Chandigarh Metro Project are as follows: 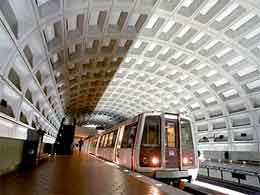 Corridor 1: This would be between Khuda Lahora to IT Park including the places Punjab University, General Hospital Sector 17, Sector 7,8, 26, Grain Market, Chandigarh Railway Station, Manimajra. The total distance would be 16 km.

Corridor 3:  This would start from Timer Market Chowk in Sector 26 to Dadu Majra and Sector 38. The in between places are Vikas Marg and Purv Marg and total distance coverage is 14.6 km

Corridor 4: This route will start at Housing Board Chowk and end at  Panchkula Sector 21 including the places Sector 14,15,16,17 and 21 and total distance being 5 km.